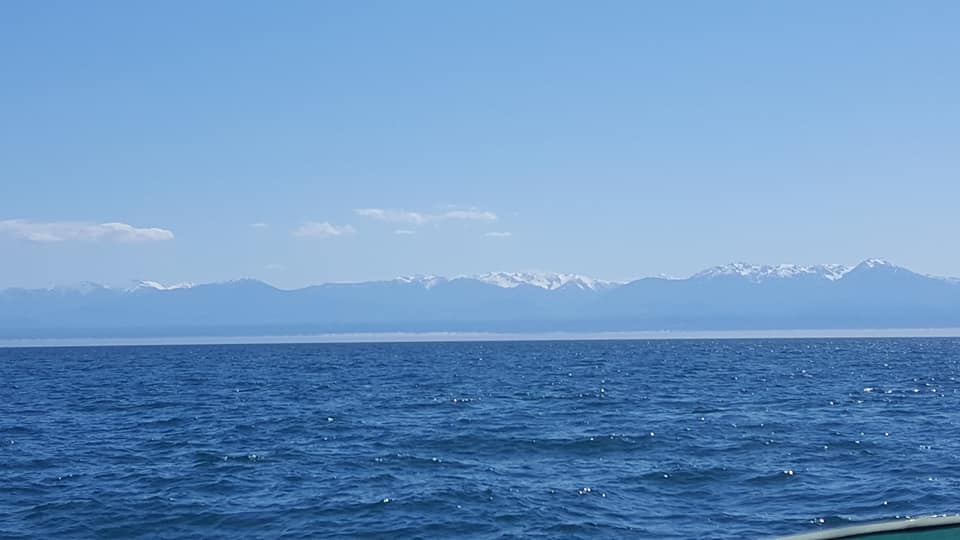 I would like to acknowledge the Coast Salish People of the Klallam, Songhees and Esquimalt Nations for their gracious hospitality. It is an honour and a distinct pleasure be swimming through the Salish Sea in their traditional territory.

The Juan de Fuca Strait is a large body of water approximately 153 km long and between15-30 km wide. It is located between Canada’s Vancouver Island the United States’ Washington State with the international boundary running down the centre of the Strait. It was named after the Greek navigator Juan de Fuca in 1787 by Charles William Barkley, a maritime fur trader. Officially defined as a channel, the Strait is part of the Salish Sea.

The seas and weather in Juan de Fuca Strait can be rough. Exposure to the generally westerly winds and waves of the Pacific often result in a number of small-craft advisories. Winds can gust close to 100km an hour in the fall with waves reaching near 10 feet. In the summer the conditions are kinder however it is not unusual for the winds to gust over 30km an hour.

The New Dungeness Buoy (LLNR 16337) located half way between Victoria, Canada and Dungeness, USA shows water temperatures from 8C to 12C throughout the year. The buoy is reading near 11C lately however I have been told that others who have attempted the swim have been in waters closer to 9C.

Tides are very strong in the Strait entering Juan de Fuca from the south. I have looked at current charts and am trying to learn as much as I can about this ever changing water way.  Flood tides flow into Juan de Fuca from southwest to northeast, and the ebb tides flows out in the opposite direction. I will be 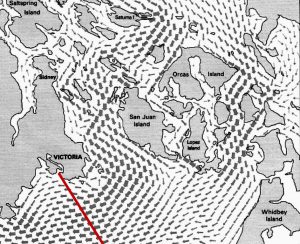 leaving on an ebb tide which will “suck” me into the middle of the Strait and push me east towards Mt. Vernon in Washington Stae. About half way through the swim the tide will change and I will be “pushed” towards Victoria. That is the hope!

There are 2 tide windows that will work well for the swim. The rest is about the weather/wind. Here’s the windows:

In addition to the tides we will be swimming through some strong currents. It’s hard to describe what will happen out there. Have a look at the two current visuals. The size of the arrow indications strength and they point in the direction of the current. These arrows change hourly.

Historically the Juan de Fuca Strait swim route was from Victoria’s Clover Point to Washington State’s Port Angeles. Over the years the shipping traffic in the Strait has increased with a number of ships receiving a local pilot just outside of either city.  For safety reasons, there are a few no-swim-zones, with one of them being Port Angeles. The swim will therefore start at Dungeness Spit (Port Angeles) and end in Victoria (Clover Point, Ogden Point or the Inner Harbour).

This is a 30km swim how the crow flies however because of the strong currents could extend the journey. The swim is expected to take between 12 and 15 hours.

Who’s swum it before?

2 thoughts on “About the Swim Route”

You can email Susan at susan@msathlete.org for more information on the swim or the MS Wellness Centre.